US Air Force B-50D Crashes with Nuclear Bomb Onboard in Warren County, Ohio 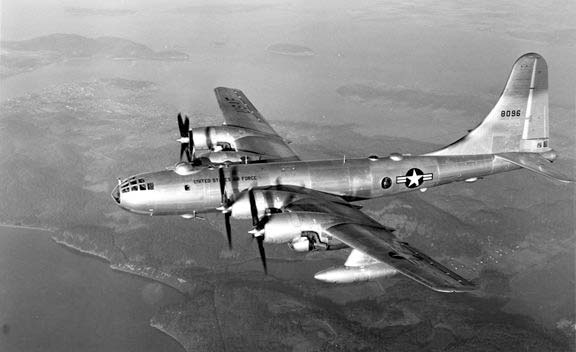 On the morning of July 13, 1950, a B-50D Superfortress bomber, tail number 49-0267, from the US Air Force Strategic Air Command (SAC), 97 th Bomb Group, took off from Biggs Air Force Base in El Paso, Texas and began its long journey in-route to England with a planned stopover at Wright Patterson Air Force Base in Dayton Ohio: the aircraft was heavily loaded. It was flying over Warren County,

Ohio at around 2:54 in the afternoon when the bomber suddenly fell from the sky and crashed approximately 4 ½ miles northeast of Mason Ohio. The crash occurred west of State Route 741 and north of Hamilton Road and was being flown by Captain John Adams Jr who, at the time, had 1020 hours flight time. All sixteen crewmembers on board the aircraft were instantly killed in the crash.

Clyde Shutts of Lebanon provided eyewitness testimony to the crash and said he was in his barnyard when he heard a racing engine. He said when he looked up, he saw the plane spiraling, nose down, toward the ground, and it appeared that the plane tried to pull up but then he lost sight of it as it went behind the trees. Mr. Shutts said he then heard a loud explosion.

The Air Force Crash Report stated the B-50D created a crater in the ground that was approximately 125 feet in diameter and 20 feet deep. Upon impact, the explosion it created was defining. Jerry Hoffmann of Clearcreek Township, Warren County, Ohio was 12 years old at the time of the crash and remembers hearing the explosion almost 11 miles away in Ridgeville. The loud explosion was caused by the fuel the plane carried for its 4 Pratt & Whitney R-4360 prop-driven engines and the deadly cargo it carried in its bomb bay: a Mark-4 nuclear bomb. The Mark-4 nuclear bomb, in use from 1949-1953, was based on the earlier Mark-3 Fat Man bomb design that was used on Nagasaki, Japan in 1945. Luckily for Warren County on that overcast and drizzly day, the bomb did not have its physics-package installed at the time of the crash. The physics-package is the part of a nuclear bomb that carries the fissile material which is imploded or exploded (depending on nuclear bomb design) to cause the nuclear reaction The Mark-4 weapon on the B-50D that crashed in Warren County did have its high explosives installed though causing the exceptionally loud explosion. The high explosives are used to detonate the physics-package of the atomic bomb.

Almost immediately after the crash, spectators began to arrive at the crash scene, and it was a gruesome sight as there were body parts hanging from the trees and on the ground. The local fire department arrived to extinguish the fire, and began putting up barricades to control the spectators. All highways leading to the crash site were jammed due to spectators trying to get a peek and figure out what was going on. It was estimated that 5000 people came to view the crash site that day.

United States Air Force officers from Wright Patterson Air Force Base began arriving shortly afterwards. They took charge of the crash site and brought in bulldozers and clamshell diggers. They were searching for the nuclear bomb but did not tell anyone what they were looking for.

Today, after almost 68 years and the loss of 16 lives on that fateful day in Warren
County, there are no visible signs to remind us of that horrendous crash and the nuclear bomb that exploded in Warren County.

Representatives of the Auto Pilot Branch, Aircraft Laboratory, HQ AMC were at the scene also to aid in the finding of parts of the auto pilot equipment and conduct further investigation into the possibility that the auto pilot may have caused the accident; the only identifiable part of the auto pilot found was an aileron servo motor. After a lengthy investigation by the US Air Force, Boeing, the aircraft manufacturer, and Pratt & Whitney, the engine manufacturer, the cause of the crash could not be determined because, as the crash report states: “ Due to the lack of information regarding the flight during which the accident occurred, and the almost complete disintegration of the airplane upon impact, it has been impossible to determine what part, or parts, of the airplane failed or malfunctioned, or any other cause factors to which the accident can be attributed.”